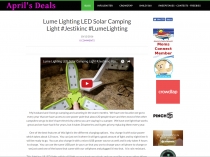 ​We attended the Toughest Monster Truck Tour Saturday 3/31 at Silverstein Eye Center Arena in Independence, MO.  We were lucky enough to get pit passes to meet the drivers before the show, so we made sure to get there about 1 1/2 early so we had plenty of time.  When you first walk in they had tons of souvenirs and we bought the girls Amaya (8) and Elyana (6) race flags so they could have the drivers sign them.  My husband bought a Souvenir Program and got it signed too.  We got to spin a wheel and scored some free gear from Metro PCS, the girls both got purple bags that they loved.

There was a total of 5 Monster Trucks attending; Larry Swim with BigFoot, Aaron Cain with Quad Chaos, Jerry Beck with Dirt Crew, Paul Breaud with Instigator and Time Jones with Twisted Addiction.  First part of the show was the Wheelie Contest worth 20 possible point, next was the Freestyle Motocross show and the last part of the show Freestyle Racing worth 30 possible points.

We had a great time, I have been to a couple of truck shows before, but never had the chance to go down to the pit.  It was pretty loud, it didn't bother me, but we did pick up some earplugs for the girls.  Luckily, they were selling them there.
There was no lack of action in this show, lots of exciting jumps and wheelies.  The Instigator has some issues and had to be towed away but was back in no time and Twisted Addiction took a corner too sharp and ended up on its side.  Tim Jones in Twisted Addiction came out on top in the wheelie contest, but the crowd favorite Bigfoot came out on top in the Freestyle Racing contest and won the competition.
We sure don’t want to forget to mention The Freestyle Motocross Racers that put on an awesome show in the middle of the truck competition.  We got to meet quite a few of them in the Pit Party before the show, they signed our souvenirs and we got a ton of great photos.  The stunts were amazing, the girls loved this portion of the show.

From start to finish we had a great time, the girls made it through the whole show which is a lot to say for a 6-year-old and an 8-year-old lol.  The parking at Silverstein Arena is great, it took less than 3 minutes to get to our car when we left.  Amaya and Elyana are still talking about it, I heard them telling their Grandma how cool the trucks were.  It’s a great show for children and adults of all ages!

Toughest Monster Truck Tour
I received complimentary tickets to this event for my honest and unbiased opinion, all views are my 100% my own.